0
Dachshund: The basic dog can be turned into a dachshund by shortening the legs and lengthening the body. Decorate the same as the basic dog.


Coyote/Wolf: Change the basic dog into a coyote or wolf by lengthening the ears, the legs slightly, shortening the body a little, and curling the tail. Curl the tail by wrapping the end of the balloon around your hand while inflating. Decorate the same as the basic dog.

Horse: To make a horse out of a dog, lengthen the head slightly, shorten the ears, and lengthen the neck, legs and tail. Curl the tail down. Decorate as shown.


Zebra: (use a white balloon) Make a zebra the same as a horse, but decorate with stripes on the face, neck, legs and body as shown.


Kangaroo: (try a yellow or brown balloon) To turn a dog into a kangaroo, make shorter front legs and much longer back legs and a long tail. Decorate as shown, and be sure to draw a "pouch" on the body.


Mouse: Inflate the balloon only 7-9". Make the bubbles for the head, ears and body parts much smaller than for the dog. Make the neck and tail bubbles the smallest (leave the un-inflated balloon as the tail). Make the head and ear bubbles slightly larger in proportion to the rest of the bubbles. Draw in face.


Squirrel: The body of the squirrel is made pretty much as the mouse (slightly larger) but with a long, curled tail (the balloon is inflated almost all the way). Draw in face.


Flying/Jumping Mouse: Blow up balloon, leaving 8-9" tail. Make three 1 1/2" bubbles. Lock twist bubbles 2 & 3 together. Decorate as shown. To make mouse fly, pull down on the tail which is resting through the circle that is formed by your thumb and index finger. Release the tail and your mouse will fly.

Giraffe: (usually done in yellow) The giraffe has a small to medium size head, small ears like the horse, long neck, front legs slightly longer than the back, short body, and a short tail. Decorate as shown.

Turtle, Ladybug or Truck: Blow up blloon leaving an 8-9" tail. Twist 5 bubbles about 1" each. Lock twist bubbles 2 & 5. There should be about a 2" bubble remaining. Bite a small hole in the tail end of the balloon and tie a knot in the balloon just behind the sixth bubble.

Pull tail between bubbles 3 & 4. (These are the back legs). Wrap the tail around the body (bubble 6) several times. For the turtle, leave some balloon sticking out to serve as a tail. Fold nozzle end of balloon back between bubbles 2 & 5 and secure.

Use a green balloon for turtle, red balloon for ladybug or any color you like for the truck. Decorate as follows: eyes and mouth the same (as shown). The turtle back has one inner circle and five or six surrounding circles or octagons. The ladybug back has an elliptical circle with a line down center, three dots in each half. 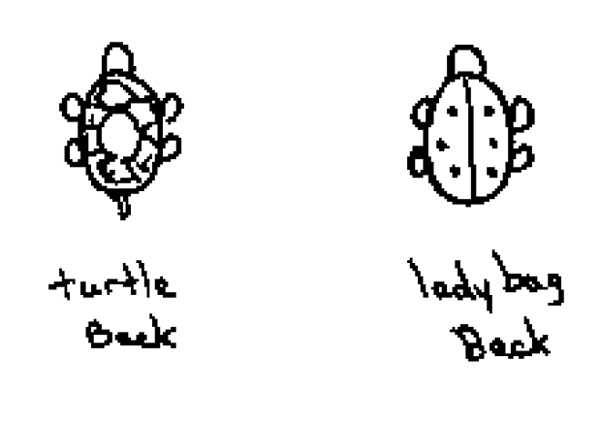 Don't forget to talk to the child as you make his/her balloon animal. If you describe the animal that you are making as you twist it, you will build a mental image in the child's mind and your balloon animal will be even more realistic to them! HAVE FUN!